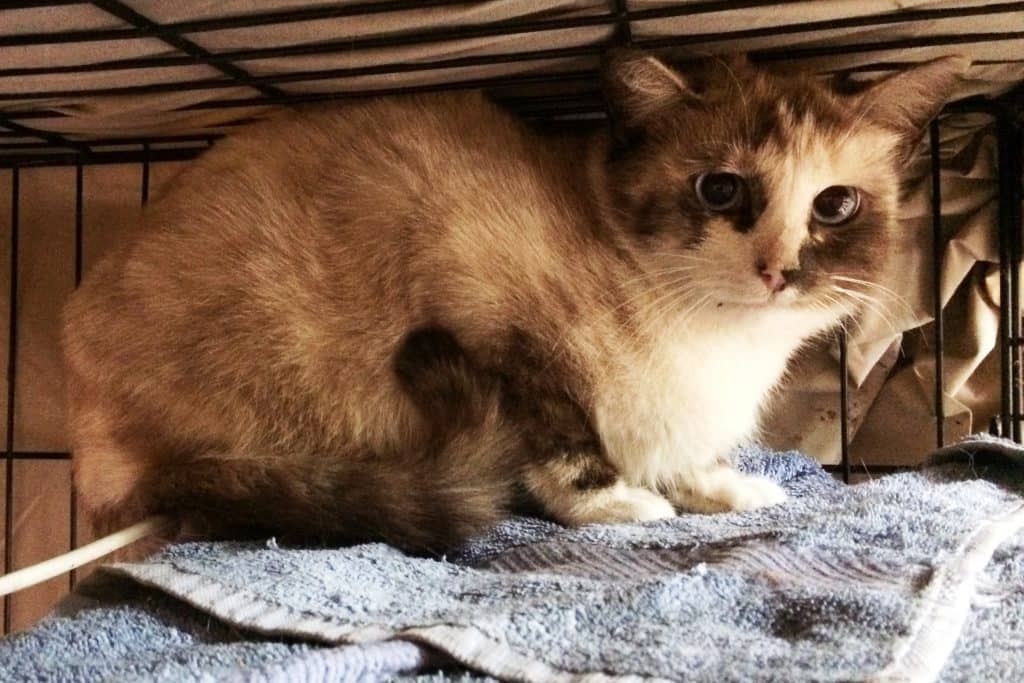 If your timid cat isn’t making progress, try these tips from Merlin Marshall of the Feral Cats online group.

“If the cat is food motivated, try to find something that the kib really likes to eat. It can be treats, or bits of deli chicken, or whatever.

Associate a word with treats

Make some sort of announcement just before and while offering this special treat – popping the jar and saying “treats!” or some such. If it’s treats, rattle the package and make the announcement. You just want to make a special noise and or comment that conveys, “I am bringing something you really, really like to eat”. The key noise or phrase needs to be said close enough to the time of offering, so the kib will associate yummy food with the phrase. If you wait too long, you won’t develop the association.

Associate yourself with treats

At first, you can put the treat in the crate and just step away, but be near so the kib can see you. If that won’t work, then put the treat in and leave so the kib will eat. You are building the association between your presence and yummy goodness. When you have established the anticipation from hearing the key sound/words, then work towards having the kib eat in front of you.

Then while you have some of it on a spoon or plate with your hand holding it in the cage (careful the kib doesn’t get out!).

Progress to petting (one stroke) on the kib’s side while eating yummy goodness. Work with more contact from there.

There is no time line on this, you have to go at the kib’s pace of accepting more and more contact with the human to get the yummy stuff.

Hold them – for young kittens

Something else to try, if the kib can be caught to be held (this works best with young kittens), is to wrap the kib up securely in a towel or blanket, with just their head sticking out.

Sit with the kib for an hour or more. This is easier if you are watching TV or something, since you will just sit with the kib and hold them, occasionally scratching their cheeks or behind their ears. Do this repeatedly. Maybe offer a treat while being held.

I have seen this work with young kittens at the shelter when they were really skittish. Obviously if the cat is large and wants to inflict serious damage on you while it is trying to get away, this method is not appropriate.

I actually accidentally used this on my first foster (and foster failure) kitten. I rescued him from a shelter I was volunteering for where he would have been killed, and took him to the vet ER since he had gunky eyes. He was about 4 weeks old at the time, and because he was sick, they put us in an exam room so we wouldn’t contaminate the pets in the waiting area.

We had to wait a long time to be seen, and I just kept holding him to keep him contained. He was skittish, he had hissed at me when I took him out of the cage in the shelter drop room, but didn’t go into “I’m going to kill you so I can escape mode”.

I finally wore him out and he went to sleep while I was holding him in the exam room. Just before he went to sleep, he looked up at me with eyes that said, “I love you”. I’d won him over. He imprinted on me. I still have him seven years later; he is mamma’s brat boy.”

Pet them while they’re in their igloo

We have had success by lying on the floor with the cat in her igloo, out of her crate, with the igloo on our stomach and stroking her for a long time, not looking at her. She purred for the first time and seemed to really ‘shift’ after this session.
^ Top