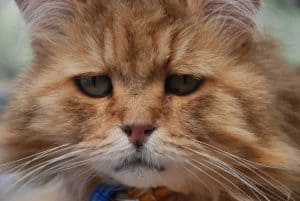 Understanding what’s going on in your cat’s furry head will help you to get them back.

So put on your cat suit and learn what they’re likely to do and how to increase your chances of finding them.

The Missing Animal Response Network has expert knowledge on what cats do when displaced from their homes. It’s not what you might think.

It turns out that checking vets and shelters, putting fliers on lamp posts and posting on Facebook isn’t very effective in finding lost cats.Not effective at all.

What lost cats do

The Missing Animal Response Network has found that:

What lost cats don’t do

There’s no evidence that these will help find your lost cat:

Amarisa squeezed through this tiny gap under a house. She was there for five days before we found her.

You know how cats often won’t eat for a couple of days when they move to a new home? Well, when they’re lost from their territory – your home – fear is likely to be their greatest feeling, rather than hunger.

In fact, the Missing Animal Response Network has found that cats will often hide for one or two weeks after becoming displaced from their territory. Yikes! They wait until they’re starving before ‘breaking cover’, which makes things even harder for you. So don’t give up.

In conjunction with the Missing Animal Response Network (formerly Missing Pet Partnership), the University of Queensland conducted research on lost cat behaviour and how they were found. This wasn’t targeted just to timid cats. It included confident cats.

Their research found that cats rarely travel far from where they were lost and that CSI-type searching is the best way of finding them.

Here are their findings.

How far they were found from home

Where they were found

Watch a video on the findings, by Emeritus Professor Jacquie Rand of the Australian Pet Welfare Foundation. .

After receiving training from the Missing Animal Response Network, one proactive American shelter has made an excellent video on how to find your lost cat – whether they’re timid, inside-only or inside-outside. It is based on lost cat research.

Got it. Now what?

Now that you understand what your timid cat is probably doing – hiding! – it’s time to start searching. You first need to triple check that they’re not inside your home. If you’re pawsitive they’re not there, it’s time to search your property outside.

Finding confident cats is easier than finding scaredy cats, as they’re less likely to be comatose with fear for as long. If your cat is very confident and likely to approach strangers, in addition to the methods on the other pages (not instead of!), you could try:

Doing a Facebook post where you ask people to ‘keep a lookout’ for your missing cat and ‘share’ may be one of the first things you’ll want to do.

Sadly, for a timid cat, it is more likely that it will give you, and the people who’ve shared your post, a false sense that you’ve helped find your cat, without actually helping them.

Firstly, timid cats hide when they’re lost from their homes. It is hard to find someone you can’t see. Your cat has much better hearing, and eyesight, than a human. The sad reality is that your cat is likely to either run, or be completely still, if they see or hear a person.

Secondly, timid cats generally stay close to where they got out. Unless you reach your nearby neighbours through the Facebook post, the people who’ve seen the post are unlikely to be anywhere near your cat.

By all means, post on Facebook, but please, please don’t let this be the only action you take. Your kitty really needs you to put your detective hat on, doorknock (not letterbox) your neighbours and thoroughly search for them. Their very life could depend on it.

Of the 60 or so lost cats we have been involved with, none were found from a Facebook post.

Getting2Zero, an Australian organisation focused on reducing killing in Australian pounds and shelters, has published an excellent ‘Lost your cat?’ flier. It has all the basic information you need. It isn’t easy to find by searching – you might like to bookmark it.

G2Z will be encouraging pounds and shelters to give the flier to people who are seeking help finding their lost cat.